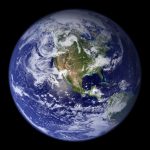 Planet Earth was born from the same nebulous gases that formed the sun, the other planets, and their moons some 4,600 million years ago.  Since then this tiny cosmic body has been through many changes as it gets older and cooler.

The Earth began as a solid mass whose core of radioactive elements generated so much heat that the earth around it melted, turning the core molten. Gasses that were created in this process escaped furiously together to form the atmosphere in “the big burp”. Oceans rose as this new atmosphere cooled and condensed.

Seen over a bird’s eye view of time where millenia go by like seconds, the planet is a tumult of explosive geological forces: mountains rise, canyons gape and continents shift. About 200 million years ago, all the continents were one mass of land, known as Pangaea; and the oceans were undivided, known as Panthalassa.
The Earth has hosted the evolution of life through these many ages and conditions, seeing an untold number of species rise, adapt and disappear. Perhaps for the first time, this life has become conscious of its host, and has joined in as another of the tumultuous forces that help shape it.
As much as is known, or hypothesized, about our planet and the mysteries that call it home, much more crouches unrevealed in the shadows of our understanding.
For instance: “How many species of organisms are there on Earth? We don’t know, not even to the nearest order of magnitude.”—All Species Foundation